LONDON — The British Fashion Council is buckled up and preparing to rocket into uncharted territory today as it fires up the first all-digital fashion week, a trip as strange and unfamiliar as a mission to the moon.

It was a mere five months ago, in early January, that designers, editors and buyers, still groggy from the holidays, returned to London for the men’s fall 2020 runway shows. It was damp and dark and a feeling of anxiety and foreboding hung over the shows’ Truman Brewery venue in East London.

Men’s designers were worried about business and trade in a post-Brexit economy, about the environment, and the threat of more conflict around the world after President Trump ordered a fatal airstrike on Iran’s most important military leader, Gen. Qasem Soleimani, in Iraq the day before shows began.

Those anxieties linger, but they’ve been shoved aside by the coronavirus and its social, health and commercial consequences, and by the anti-racism protests and issues surrounding diversity after the killing of George Floyd at the hands of Minneapolis police.

The BFC, which would have been staging the spring 2021 London men’s wear shows this month, was forced to act quickly. With the U.K. locking down in late March, stores and factories closing and employees sent home, men’s designers were clearly going to sit out the June shows. But the BFC powered ahead.

It polled London designers about what they wanted to do in June, and scrambled a survival fund for the most fragile businesses. The fashion council handed out the first tranche of grants last month to 37 designers including Roksanda Ilincic, Hussein Chalayan, Christopher Raeburn, Richard Quinn and Matty Bovan, and is in full fund-raising mode to pool another 500,000 pounds before opening up to applications once again.

The organization put together the sort of fashion week it had been discussing — theoretically — for months, devising a lineup of unisex shows, films, public-facing events and digital sales platforms for those brands ready to sell their collections.

Teaming with the Council of Fashion of Designers of America, the BFC also issued a manifesto urging a change to the rhythm and frequency of shows and presentations and a scaling back of out-of-season events in order to take the heat off designers, press and members of the industry.

“We asked ourselves if we could reset and rethink, shouldn’t fashion slow down and go back to its roots as designer fashion? Can we slow down? Can we think about the purpose of fashion week?” said Stephanie Phair, chair of the BFC.

She said the group had acknowledged a long time ago that the rhythm of the shows didn’t fit the reality of business; deliveries didn’t suit the seasons, end-of-season sales were arriving too soon and the industry was damaging the planet.

“We’d been having these conversations with designers for a long time, and COVID-19 only accelerated them,” Phair said. “You know, in good times, in times of growth, inertia is pretty strong and we found that it was very hard to manage any changes because there are so many stakeholders. But when everything is thrown up in the air, you’re able to reset.”

In an interview, she said creating this new June showcase was “very much our duty. People often think of the BFC as just the organizers of fashion week, but throughout the year we operate as a marketing platform, one that champions huge issues and lobbies government.”

Until now, the digital element during the London Fashion Weeks had been small, with only a few designers showing films in place of runway shows, or offering up look books online. With few exceptions, sales were also taking place in physical spaces rather than online while the stressed-out band of press and buyers dashed between runways and venues.

What a difference five months makes: For this three-day showcase, which runs from June 12 to 14, the BFC has partnered with myriad digital agencies, studios and showrooms, including Red Apple Creative, the radio and online audio specialist; the creative agency Wednesday, and Joor, which offers a virtual showroom experience and order management tools so that people can do business digitally, regardless of time zones or geography.

Other partners include Smartzer, which creates interactive technology that will be used to convert regular video content into interactive and clickable experiences, and Instagram, which will be helping designers to optimize their channel and bring their show or other content to life.

The BFC sees the showcase as a marketing platform: Everyone is invited to tune in, there’s content galore in the form of films, Q&As, podcasts, playlists, narratives and events, and some new fashion, too.

The organization isn’t streaming anything live, and plans to keep this weekend’s content up for the next months so that members of the public — and the industry — can tune in where and when they want.

Phair said the BFC’s vision was to conjure, “an unbelievable moment, and marketing platform, for all of the brands involved, but also for the conversation around fashion, for the topics that are important today. Fashion is a cultural conversation in a way that music and art and architecture and pop culture are. It goes beyond clothes. Showcasing that digitally actually gives us the opportunity to show even more. I think this could really spell the beginning of a new approach.”

While Phair argues there is still room “for the magic that is created in a live showroom or a live environment,” she believes that designers cannot have an audience or marketing strategy without “a very robust digital strategy.” With international travel now severely limited, Phair believes digital will become even more important in helping designers connect with media, buyers and the public.

Lockdown, frozen economies and the consequences of the coronavirus pushed the BFC into creating a new style of showcase, and urged it to think about the longer term, too.

Next month, Milan and Paris will host their own fashion showcases, public-facing affairs with a big accent on digital. When September rolls around, the BFC will stage a bigger showcase, which will likely be a mix of physical and digital.

Phair said, come Monday, the BFC will continue to meet with the designers, and also address issues around international travel. Currently, anyone arriving in the U.K. has to quarantine for 14 days or face a fine. Many think the quarantine, which came into effect earlier this week, will have been repealed by September, and the BFC is preparing for a variety of scenarios.

Whatever happens, Phair believes it’s important for London’s designers large and small to have their September moment, because they can benefit from one another’s buzz and energy.

“People end up creating more events and art, more cultural pieces, around a certain moment, so we still believe there is room for [a physical London showcase], but the purpose and format are still being discussed,” she said. One thing is certain: That second trip to the moon shouldn’t feel as strange.

Sun Jun 14 , 2020
The coronavirus has come for Fashion Week, but Fashion Week is unbowed. With the 2020 edition of LFWM going all-digital, the event’s key designers talk us through how they’ve adapted to showing clothes in a world where showing clothes is (almost) impossible. What’s been the biggest challenge with producing a […] 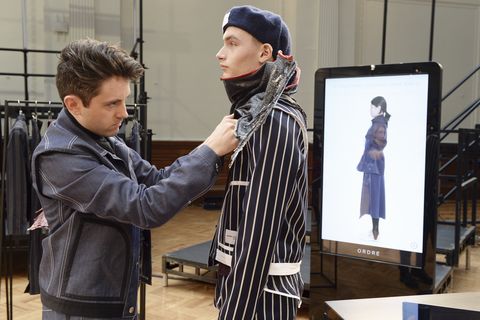